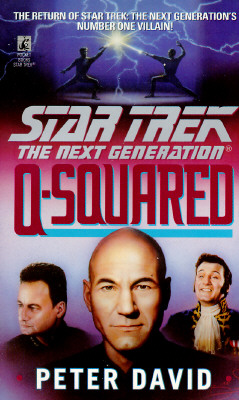 Q-Squared (Star Trek: The Next Generation)

In all of his travels Captain Jean-Luc Picard has never faced an opponent more powerful that Q, a being from another continuum that Picard encountered on his very first mission as Captain of the "Starship Enterprise(TM) ." In the years since, Q has returned again and again to harass Picard and his crew. Sometimes dangerous, sometimes merely obnoxious, Q has always been mysterious and seemingly all-powerful.

But this time, when Q appears, he comes to Picard for help. Apparently another member of the Q continuum has tapped into an awesome power source that makes this being more powerful than the combined might of the entire Q continuum. This renegade Q is named Trelane -- also known as the Squire of Gothos, who Captain Kirk and his crew first encountered over one hundred years ago. Q explains that, armed with this incredible power, Trelane has become unspeakably dangerous.

Description: 0671891510 WE HAVE NUMEROUS COPIES. PAPERBACK. Light to moderate wear and creasing to cover/edges/corners. School markings and writing on/inside covers. Minimal markings/highlighting on/inside book, none of which detracts from content. Binding and cover solidly connected.

Q-Squared (Star Trek: The Next Generation)